Wow. Just wow. I’ve heard great things about the Byron Writers Festival, but it’s only when you’re there, does it really take your breath away. So why is this one of my favourite festivals? 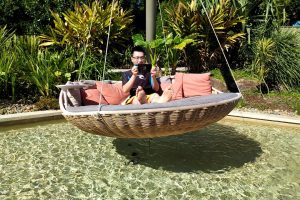 There are so many things that I took away from the past week. I guess I should start at the beginning, where I first landed and took a nice jog along the beach hehe. Staying at the Elements of Byron also gave me some fruitful opportunities to do some work on my next cHEwY creation, Don’t Follow Vee. Yes, this was also my writing retreat too haha (I mean, when else am I going to get this opportunity!)

Okay, now onto the festival itself. The primary schools program had me performing in front of 1000 kids over the two days. I had an absolute blast mixing with the cHEwY gum gums in Lismore and Byron Bay. Some kids were on a bus for two hours to get to Lismore, so I better give them a good show haha. I had a fresh book under my belt to talk about, so these kids were guinea pigs for some new jokes and segments. They involved chocolates and marshmallows so you can’t go wrong haha.

Protip: A kid can probably handle 5 marshmallows in their mouths before they feel sick. 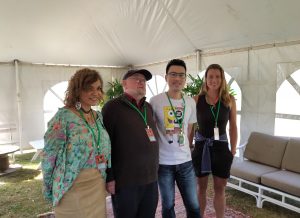 I bumped into Andrew Hansen and Jess Roberts again, and I got to chat comedy and Nintendo games with Andrew. Turns out that we both love the Nintendo Wii U haha. As a long-time chaser fan, it was nice to see him enter the children’s book world, along with Jess. I can’t wait to see what else they have in store…

I had a free day for the secondary schools program, where it was a lot easier to stalk legends like Tom Kennealy, where we had a good chat about writing and his life. And what a life it was! The way he spoke to the senior kids in his session about writing was pure GOLD. Write 500 words a day and you’ll have a book in no time. Draw on your own history and the madness of your family (done and double done haha). Draw on the storytelling gods and be prepared to suffer through the first draft to get to the glory of the end… 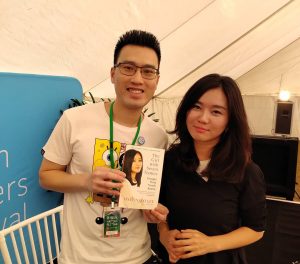 I also got to meet Hyeonseo Lee, who wrote the The Girl with Seven Names. Her tale was inspiring. In fact, there were plenty of inspiring stories shared with the authors that I met, including Robert Drewe and Greggory Smith, who survived for over a decade in a forest. Over dinner, he spoke about this experiences and what he learnt. Think of it as a personal session haha. Now when it comes to festivals, I have no shame with stepping in and getting stalker snaps and all that kind of stuff haha. I managed to catch slam poet Jesse Oliver, comedian Kitty Flanagan, Anne Aly and new local author, Ben Hobson.

It was a pleasure walking around the festival grounds. I just can’t believe how spacious the layout is. You can lay on the grass and chill between sessions, soaking in the sunshine, and still listen to the sessions. There are no queues, because you’ve already paid for your pass, it is like a music festival, so stay for a bit, dip in and out. There is no rush to grab a seat. Take your time and really reflect on what you’re listening to. The sunny weather helped make this mostly outdoor festival feel so relaxed and summery…in the middle of winter haha.

My own session with Matt Stanton and Lian Tanner was a joy, thanks to the impressive chair of Michael Williams. We discussed ‘Should Children Books always have a happy ending?’ Watch out for a future post about this LOL

Then there was the final day, with the Kids Day Out. I love performing in front of kids of all ages (including the toddlers) and parents alike. It’s an extra challenge for me to try to make all of them laugh at the same time, and I succeeded with a few zingers, including a nice sing-a-long of Turtleland (check out my Instagram for the video, thanks to Tristan Bancks).

Usually after a festival, I’d feel tired and drained, but I left feeling so buzzy with ideas and plenty of great memories. How did that happen? Well if I could sum it up in a few words, it would be the positive, breezy, beachy vibes…how can a festival be so jam-packed, yet feel like there’s all the time in the world? How can so many provocative subjects be discussed in such a laid-back and honest way? How can people be so approachable and eager to share their lives? I guess it really is all about the location 🙂