The last week has been a rollercoaster ride as the Sydney Writers Festival rolled into town. Ever since my first appearance back in 2008, I have cherished every moment of being a part of this festival. Let’s go through some highlights of that week where I felt like an author rockstar haha.

Opening party and I was glad to see some familiar faces, Deb Abela, Matt Cosgrove, Frances Watts and Will Kostakis. Sometimes I feel a little shy at events like these, so many people from the adult book world that I don’t know, but I build up the courage to go because well…I never want to take my festival pass for granted. It was a great night, I had a few drinks and went home happy, ready for the first schools day… 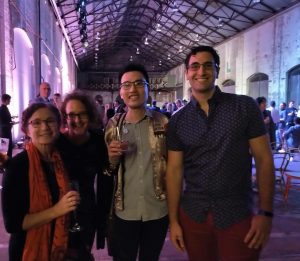 Times I was mistaken for Eddie Woo: 2

First schools day in Parramatta Riverside Theatre. I turn up in time for the first break. That’s when I first get hit with the buzz, kids are always so excited to be here. Maybe it’s because they’re bookworms, aspiring writers or get to have a day off school.

It was my first time meeting the lovely Megan McDonald, author of Judy Moody and Stink. She did well, fighting the jet-lag to get down here. I love how SWF have 2 international authors every year, it’s nice to discover new writers, as well as meet some famous ones who have revered series like Judy Moody.

a hoot, I tried a few new jokes and did a rap as I came on stage, because why not? It’s not everyday you get to perform in a venue like this. Sydney Writers Festival school days puts you in some of the best performance spaces 🙂

Today we’re in Penrith, in the Joan Sutherland Theatre. Mick Elliott, our awesome host for the last two days, gives me a present…a pair of Spongebob Vans shoes. I geeked out!

Having been the MC for the Schools Days for the last 2 years, I know how important it is to hype the kids up before each performer, as well as plug your own books and do a few gags in between. Mick did all of these things in fine style.

The theatre is a lot narrower than other places, but it had those nice staircases that led to the very back. So I was inspired to jump down and dance my way up and down the aisles, slapping hands and signing random notebooks. Because why not? For a lot of these kids, it may be the first time they see an author. They couldn’t have picked a better time, because the authors had to bring their A-game, and the sold-out crowds really amplify your performance and delivery. You feed off the audience’s energy and well…you really do feel like a rockstar hehe. I might as well pretend to be one anyway.

There are theatres and then there’s the Town Hall. This is where things get crazy. I come early to see the first half, where Katherine Rundell and R.A Spratt rock the joint. Katherine writes really cool adventure books, where Rachel is performing a comedy show, delivering zingers and (soft) rockets into the crowd.

When Deb Abela brings me on stage, nothing ever prepares me for the roar of 2000 kids. Every reaction gets heightened. Any joke that hits, lands with a thunderous laugh. I love seeing 2000 hands in the air, waving around, obeying your every word. I wish I could sing or play guitar. But I have settle for getting the crowd to clap, as I do another random rap song.

After my performance, I rush down to the signing table. The SWF volunteers do a wonderful job getting all these kids into the ordered queues, writing their names on sticky notes.

I was lucky to have hosted the Jeff Kinney event last year, so you think I’d be able to control my nerves…but backstage I was as nervous as they come, meeting an author superstar. I already met Aaron briefly at a photoshoot for the festival, so I was able to greet him as a normal colleague, not flustered fanboy haha. I did get tings of excitement when I got him to sign my Pig the Pug boxset though haha. Perks of the green room baby!

I slipped back into my MC role, but this one was a tad easier than school days because they know why they’re coming to see. They’re holding the books. Aaron Blabey, one of Australia’s finest exports to the world, need I say more? Having kids and their parents in the audience gave a different kind of vibe too.

I did my bit and let Aaron do the rest. I gotta say, it felt like watching an E3 Video Games Conference talk, because he let some news bombshells go off! Therma the Unicorn movie! New Therma the Unicorn sequel! First reading of Pig the Tourist!

No wonder everyone had a smile on their face by the end of it. What a feel-good afternoon. Plus I can now add ‘being Aaron Blabey’s microphone as he draws on stage’ on my resume.

Family Day at Carriageworks is the best day because this is where the kids and adult sessions are side by side. So there’s a mix of adult and kids authors in the green room. It means I get to do ninja-photo ops. I mean, my festival pass needs to be exploited right? So I managed to briefly chat with Richard Glover (who sounds exactly like on the radio, yay) and Andrew Sean Greer, I left them as confused and dazed, but I got the photo in the end haha.

I went to see one adult session, Growing Up African in Australia. I’m going to leave this for another blog post (stay tuned) but the gist of it was…I’m so happy to hear all these fresh voices leap out of the Australian Lit Scene. We need more diverse books!

I was there for The Neverending Quack Up, where editors of Total Quack Up (an anthology raising funds for Dymocks Children Charities) where Deb Abela, R.A Spratt and I were contestants in a gameshow where hosts Adrian Becks and Sally Rippin led us through a storytelling competition, where we had help from some kids in the audience. Jokes and lollies were thrown around, a total quack up indeed hehe.

There was no time to rest because we had one more killer day. Another chance to rock it with 2000 excited kids. I think when I’m back doing school halls, classrooms or libraries, I’ll remember days like today. It was a priceless opportunity. At the end, there’s a flurry of signed books and bookmarks to hundreds of kids. Some of my books have sold out. I’m signing away and I can see the last few kids in the queue. One volunteer asks me if my hand will ever get sore. I just smile and say, it’s the best part of the job.