This is my 13th time to Thailand, but I’m still finding new experiences here. One of these is the massive Loy Krathong festival.

Now if you’ve read my sequel, Thai-no-mite (plug plug plug), there’s a story called Joy Krathong about the festival. This story was based on my own childhood memories of Loy Krathong back in Sydney. It’s a fun festival alongside Parramatta River in the third Saturday of November. But being in Bangkok for the festival is a whole new world.  Despite the fact that it fell on a Thursday this year, it felt like being out in on New Years Eve. Then again, it’s always crowded in Bangkok, this is a true 24 hour city after all hehe.

My auntie suggested we go to the biggest Loy Festival celebration, happening along the main riverside. Usually locals would travel to Asiatique, a shopping mall along the river. But there was a new player in town, a rival called Siam Icon, opposite Asiatique. So we went to Siam Icon, following the crowds who were eager to explore this side of the river.

Bangkok’s shopping malls go all out with decorations, whether it’s Christmas (more on that in another post maybe haha) or Thai New Year. Siam Icon’s basement level was trying to recreate a floating river market indoors. All the food and glamour with air-con, how can you go wrong haha. 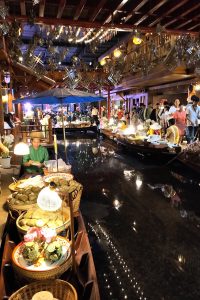 There were concerts popping up in all parts of the shopping centre, along with more stalls selling Krathongs, these things that float. I don’t know how else to describe it haha. Back in Sydney, I only ever thought they were made with banana leaves, with flowers on top, but there are some funky ones…

This one is made out of some sort of clay? 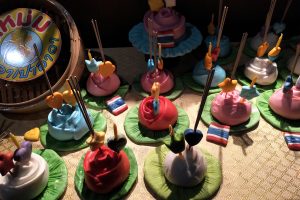 And not just the traditional krathongs too, you can get animal ones too. They kinda look birthday cakes haha.

I was tempted to get something wacky, but I was drawn to something simple 🙂 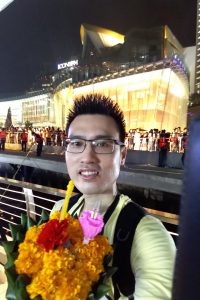 Once you step outside, the event actually hits you when queue outside to float your krathong. The line must have stretched on for half a kilometre, but it does move quickly. I saw some people grab their nail clippers to cut their nails into their krathong. You’re supposed to have some part of your body in the krathong, hair or nail being the most common, to represent the old self. You are getting rid of the bad luck, bad vibes and letting it float away down the river. My auntie put in a coin and I plucked some of my hair (ouch!).

I was worried that my candle was going to go out, but there are guards at the very end, armed with giant candles and long extended lighters to make sure your candle is lit as you reach the riverside. Now it’s nothing as romantic as gently putting your krathong in the river. It’s more of a slide haha. Pretty clever idea. 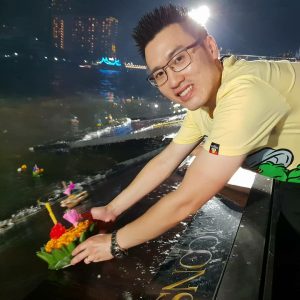 Now I wish I could say that there was a lovely sight of krathongs, all lit up, floating down the river (just like in Parramatta River). But this river was still being used for ferries, so the krathongs all stayed in a small part underneath the pier, and cleaners would scoop it up. Yet, the imagery is still there and it’s a joy to see Thai locals of all ages, upholding this ancient tradition together.

The river may have not been lit, but the fireworks made sure that the sky was alight. A perfect way to end a fun night. It was so surreal to experience something that I thought was so minor back home in Australia, being held in such reverence here. The Loy Krathong festival happens almost 6 months after Thai New Year, offering a second chance for people who have had a dud year so far. There is still hope. You can let your worries, fears and bad habits float away…