After 3 posts in 3 weeks (a record, believe you and me), I’m trying my best to blog at least once a week and post it on chewsdays, that’s Tuesdays for normal folk. Actually, don’t hold me to this promise because we’ll see how confident I am with my blog posts when the deadlines and August’s BookMonth visits hit haha.

So I’ll be starting a new series called FAQs, where I expand on a question that I get asked often when I visit schools. Yes, ‘how much money do you make?’ may get explained down the track (Tax agents alert haha)

But I thought this one would be a good question to kick things off, why do I call my fans, cHEwY gum gums?

Let me take you back to 2007, when I first made a decision to become a ‘full-time’ writer. I started a scrapbook to map out my writing journey. As you can see from my prologue, I knew that it was going to be tough. I had an imaginary personal publishing company called cHEwY creations. Whether it was Christmas cards, notebooks or anything with my writing on it, I would add a cHEwY creations imprint and logo (a flower). 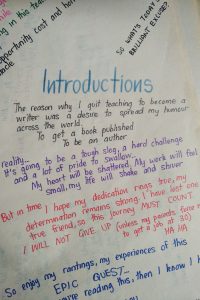 Okay, so why cHEwY creations? The long-cut answer is that I think imagination and creativity is like chewing gum. You keep chewing on it until you blow a ‘idea’ bubble. I suppose when that bubble pops, it means the idea becomes a story haha. The chewing includes brainstorming, planning, drafting, or even just literally chewing/thinking about that idea. I suggest gummi bears for chewing purposes, just because. That’s why I rarely measure my writing time with a word count, because sometimes that pondering/wondering is important too. As Katrina Nannestad says, daydreaming is allowed!

So when my fans are called cHEwY gum gums, they are following my own writing journey and philosophy, to chew on your ideas and let your creativity go wild. Sure, I could have come up with something different, like oLLiE fans, or simply um…Pom Poms haha. But whenever someone says cHEwY gum gums or asks me about them, I am transported back to my origins of my writing journey. And it’s still going…besides, I get a kick out of kids who say that they are cHEwY gum gums and secretly I can’t believe I can get away with it all 🙂

Oh, and in case you’re wondering, I’m up to Volume 4 of my cHEwY creations scrapbook…I may share a few more things in later posts. Watch this space.