As I scroll through my Instagram (@oliverwinfree plug plug plug) feed, looking at everyone’s #10yearchallenge posts, it’s amazing to think that Instagram has lasted this long as a social media platform. There are kids whose entire life is up on Facebook thanks to their families. This was the spark for Don’t Follow Vee. What if these kids get to a certain age and they don’t want their baby photos up there anymore?

But I hesitated writing Don’t Follow Vee. I was scared about using Instagram, Facebook or any social media in my stories, in case it makes my book feel dated.

I mean, I still cringe reading books that mention Myspace haha. How long will these platforms last for?

It’s something that every YA and middle-grade writer has to tackle. How much use of social media should they mention? Most teens use social media, that is a given. But you can either go all in or not. I’ve seen books who mention text messages to be on the safe side, because that could be any platform and you don’t need to name it. I’ve used text messages in The Other Christy and Super Con-nerd.

Mentioning technology also raise these kind of questions, but you’ll have an easier time with generic terms like computer, tablet, laptop. Then there are legacy brands like iphone, ipad, Playstation that you can get away with (as long you’re not too specific and write iphone xx VR Max 8)

I go against this rule when I mention video games. My first book, Thai-riffic! mentioned Lengy having a Nintendo DS! My new character Vee has a Nintendo Switch. Secretly, as a lifelong Nintendo nerd, it gives me joy to give these Nintendo games a plug, but I argue that these characters can still play these things AND not feel old, because it can be seen as retro. I can still use my Nintendo DS now if I wanted to. Of course legacy technologies need to be trendy too. You would an easier time mentioning vinyl records than Minidisc.

Another option is to go all-in. In 2017, I was on a panel at the Melbourne Writers Festival about social media, with Gabrielle Williams who had just released her book, My Life As a Hashtag. The cover was an Insta-gram post. No hiding it here. 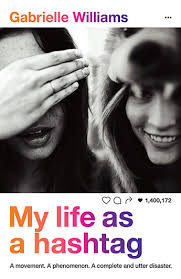 I enjoyed this book, and it gave me the guts to write Don’t Follow Vee. In fact, I had a sense of urgency to get Don’t Follow Vee out there before Ariana Grande switches over to a new social media platform and sinks Instagram haha.

So how do you mention social media without making your book feel dated? You can make up your own social media platform. I prefer those writers who go all out and make up a fresh one, rather than have one that is a obvious ‘fake’ like InstaBook or FaceGram. I think teen readers would just roll their eyes haha. So take that risk, mention Instagram or Facebook if you want, but don’t make a big deal of it. I know kids and teens don’t. They just use whatever their friends are using; their loyalty to their friends, not the platform.